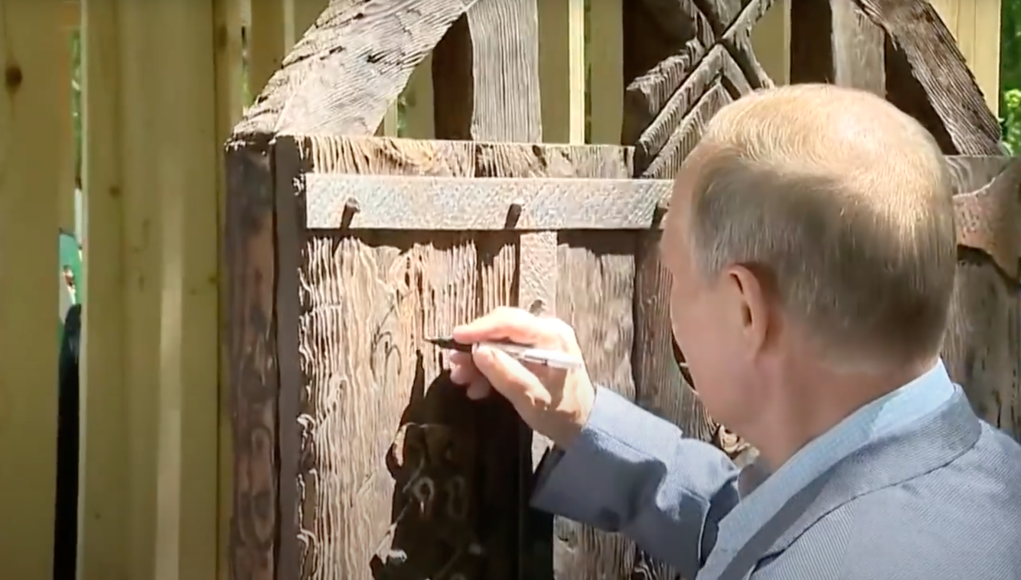 Vladimir Putin’s warnings to NATO that it must retreat from Russia’s borders has exposed his fear of failure, both in Ukraine and domestically. Despite his claims, Putin is not afraid of a NATO invasion of Russia or of Ukrainian attacks on Russian territory or against Russian-speakers in Ukraine. His core fear is that an independent and democratic Ukraine together with a NATO umbrella for regional security throughout Eastern Europe will expose the failure of the Russian state and precipitate the collapse of his corrupt authoritarian regime. And paradoxically, another Russian attack on Ukraine would accelerate that process.

Moscow has threatened Ukraine with an expanding military invasion and amassed tens of thousands of troops with offensive equipment along its northern and eastern borders and intensified its maritime and amphibian forces in occupied Crimea. Putin has simultaneously raised the stakes by issuing what amounts to an ultimatum to Washington. In a diatribe disguised as a document,Moscow has demanded that NATO disarms itself by pulling out troops from all front-line member states, refuse to provide membership to any other post-Soviet countries, including Ukraine and Georgia, and acknowledge Moscow’s sphere of dominance in all countries bordering Russia.

The Joe Biden administration has signaled that it will discuss security questions with the Kremlin in the coming weeks after consulting with its European allies. The high-level talks between US and Russian officials are to be held in Geneva on January 10 and will focus on Ukraine and nuclear arms control. Further dialogue is expected over the following days between NATO officialsand Moscow as well as discussions in the Organization for Security and Cooperation in Europe (OSCE). NATO’s key allies are to be engaged throughout the process.

Given Putin’s radical demands, the White House faces two stark choices – either to try and appease Moscow or to stand firm, reject any ultimatums, and issue its own demands. Any compromises on the core principles of the NATO alliance or even a willingness to scale down NATO’s defensive posture along its eastern flank will encourage the Kremlin to demand a further retreat and claim victory over the West. Any pressure on Ukraine to allow Russia’s proxy separatist entities to gain “special status” will paralyze the state and embolden Putin.

Instead of giving any credibility to Kremlin threats or warnings, Washington should use the opportunity of high-level discussionsto demonstrate NATO’s solidarity and resolve. It can also specify Allied demands on Moscow, including returning Crimea and all of Donbas to Ukraine, removing Russia’s threatening military presence along the borders of all neighboring countries, including NATO members and partners, and terminating attempts to integrate Belarus in Russia’s security structures.

To strengthen the Western hand in preparation for talks with Moscow, Ukraine must be provided with all the weaponry it needs to make a potential Russian invasion as painful as possible. These need to include more effective defenses against missile salvos and air strikes, including Patriot surface-to-air missile systems and Stinger shoulder-fired surface-to-air missiles. An array of other equipment, including Mi-17 helicopters, initially intended for the Afghan security forces, could also be transferred to Ukraine.

Simultaneously, a list of onerous economic sanctions against Moscow in the event of another military assault against Ukraine can be specified. This must include Russia’s full isolation from financial markets and disconnection from the SWIFT financial messaging network that underpins the global banking system. All foreign assets of Putin and his oligarchic clients would need to be frozen or seized and Kremlin-linked companies blocked. And most importantly, a comprehensive oil and gas embargo of Russia’s exports would push the economy toward bankruptcy.

But why does Putin want “security guarantees” when neither NATO nor Ukraine are threatening Russian territory? The answer is a growing need for an international success amidst mounting fear of domestic crisis. Public acquiescence and regime survival have been increasingly based on an aggressive foreign policy and anti-Westernism to demonstrate Russia’s international influence.However, Putin faces the danger of miscalculating his own power and the domestic crisis will be accelerated by a military defeat amidst economic decline for which the Kremlin will be widely blamed. A further attack on Ukraine would also raise support in Western capitals for increased military capabilities along NATO’s eastern flank.

A deeper invasion and a prolonged military quagmire in Ukraine with mounting losses for Russia’s armed forces will not be sustainable. Regimes that lose wars or cannot win them when they have staked so much on victory invariably collapse in Russia. A major setback in a war with Ukraine, involving mounting casualties and wasted state resources, would propel power struggles and popular revolts against a discredited leadership and highlight the accumulated failures of the Russian Federation.

It is worth remembering that the Tsarist empire collapsed following a military defeat by Japan and a prolonged war with imperial Germany, and the Soviet Union and its East European empire disintegrated in the wake of a failed war in Afghanistan. Putin’s power and credibility and Russia’s survival in its current territorial form would be the casualty of a broader war with Ukraine and an escalating confrontation with the US and NATO.

Putin’s chest-beating abroad indicates that economic and social conditions in Russia are deteriorating and that he may need another foreign escapade to shore up his credibility and ensure his political survival. In a heated recent video conference with Russia’s Presidential Human Rights Council, Putin rejected a proposal to let Russia’s federal regions secede if they no longer wanted to be part of the state. He warned of a repeat of the bloody Yugoslav wars and claimed there were 2,000 territorial claims inside Russia that should be treated “very seriously” as they could rupture the country.