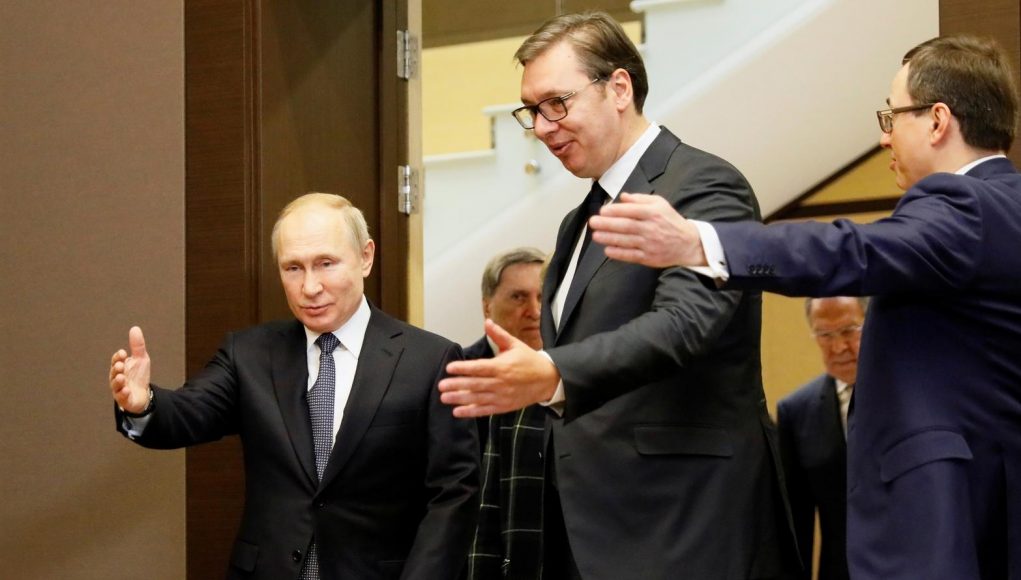 Under the rule of President Aleksandar Vučić, Serbia is desperately trying to imitate Russia. It seeks to be the dominant power in the Western Balkans and is mimicking Putin’s “Russian World” ideology with a smaller “Serbian world” variant. But the problem for Belgrade is twofold: its expansionist agenda will be resisted by all neighbors and international agencies, while its pursuit of “greatness” will ensure that Serbia becomes ever more dependent on Russia’s geopolitical calculations.

In its Russian World (Russki mir) agenda, the Kremlin declares an obligation to defend all Russian speakers or people born in the Soviet Union and their descendants. This includes the right to intervene in the affairs of neighboring states and even the necessity of conquest and partition to allegedly protect Russians-speakers, as already witnessed in Georgia, Moldova, and Ukraine.

In the Serbian “younger brother” version of Srpski Svet, as recently declared by Interior Minister Aleksandar Vulin, all Serbs have the right to be united and live together in one state. Just like Russians, the Serbs are portrayed as the long-suffering victims which hostile foreign powers are conspiring to assimilate or eliminate. Belgrade therefore claims the right to protect Serbs in Bosnia-Herzegovina, Montenegro, Kosova, North Macedonia, and Croatia. In addition to political intervention on their behalf, this means expanding an army capable of ensuring Serbian interests through possible military conquest.

As the former propaganda minister for Slobodan Milošević, Vučić, is well versed in the tactics developed by the Soviet political police, intelligence outfits, and state media to distort reality and mobilize citizens against the imaginary enemy. And just in case too much Westernism has rubbed off on Vučić, Putin’s henchmen and operatives are ready to stiffen his spine and provide the propaganda and agitation needed to stir the Serbian populace.

Vučić’s Serbia acts like a deferential sibling toward Russia, viewing its “elder brother” as a tough and wise leader that can help junior achieve his regional ambitions. But under this fraternal surface, the Kremlin is manipulating Belgrade to serve its geopolitical goals through an unequal relationship based on four dependencies: diplomatic, economic, military, and political.

Serbia is diplomatically beholden to Russia and Belgrade has pledged its loyalty to Moscow. Among other acts of submission, the government has vowed never to impose economic sanctions on Russia, despite calls from the European Union that Serbia must align its foreign policy with that of the bloc if it is serious about membership. Unlike Montenegro, North Macedonia, and Albania, Serbia did not join the Western embargo on Russia following its annexation of Crimea from Ukraine or the arrest of Russian opposition leader Alexei Navalny. Belgrade evidently does not view Ukraine as a brotherly Slavic state and welcomes theelimination of political dissidents.

For the Kremlin, the small “Serbian world” is becoming part of a much larger “Russian world” and it expects the Vučić’ administration to demonstrate its gratitude. Vučić seems to be permanently indebted to Putin for blocking Kosova’s entry into the United Nations and refusing to recognize its independence. Thespeaker of parliament Ivica Dačić has praised Russia as Serbia’s best ally that protects its “territorial integrity” and defends it in international fora. In stark contrast to the submissive current government in Belgrade, Tito the communist stood up to Moscow’s arrogance and successfully resisted Stalin. Even Miloševićmaintained his independence from Russia and exploited Yeltsin to his advantage against Western powers.

Serbia’s economic dependence on Russia continues to expand, particularly in the energy field. In January 2021, Belgrade defied U.S. calls to reduce its addiction to Russian energy and diversify its supplies. Instead, it officially launched a new gas link via Bulgaria and Turkey with a 400 kilometer section of the Turkish Stream pipeline for Russian gas that will cross Serbia toward Hungary and Bosnia-Herzegovina. Serbia has so far received Russian gas via Hungary and Ukraine, but Moscow intends to circumvent Ukraine in order to deplete its budget, strangle its economy, and reduce its role as an energy transit state to Europe.Serbia depends almost entirely on Russian energy supplies and this bolsters Russia’s controls over the Balkan state.

On the military front, Serbia appears to be following Kremlin commands. Above all, Moscow is adamant that any Serbian moves toward NATO membership will not be tolerated and could result in the replacement of Vučić. Serbia is being groomed as a military outpost of Russian power and has been armed with warplanes, tanks, and anti-aircraft systems. Vučić recently visited an air defense unit near Belgrade that has been equipped with Russia’s Pantsir-S1 system, designed to defend targets on the ground from cruise missiles, drones, and low-flying aircraft. And of course the Russo-Serbian “humanitarian center” in Niš serves as an intelligence and special operations facility for Moscow.

Serbia’s military build-up is viewed with concern by all neighboring states. For Putin, Serbia provides a valuable option of stirring conflicts and even triggering armed clashes in the West Balkans to distract attention from conflict zones that Moscow engineers in Ukraine, Georgia, and Belarus, and to disguise mounting unrest in the Russian Federation itself. At some point, Vučić could be pushed or provoked into a military confrontation on the pretext of defending the little “Serbian world” and may even appeal to the larger “Russian world” for assistance.

The dependence of the Vučić government on Moscow’s political approval is also escalating. Kremlin support for assorted nationalist groups, its extensive influence in Serbia’s information space, and its espionage penetration of key institutions is intended to keep Vučić in check. The coup in Montenegro in October 2016 was both an attempt to dislodge the pro-NATO government in Podgorica and a signal to Vučić that the Kremlin can replace him if he steers away from the Russian orbit. By surrendering to Putin in every major domain, Serbia has in effect become a willing victim of Moscow’s policies.