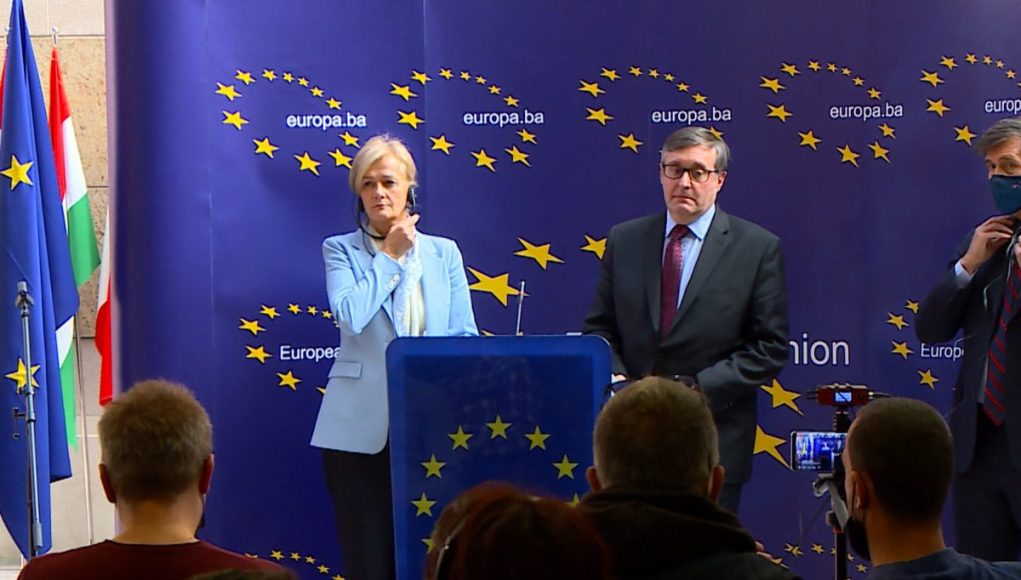 The US State Department’s Special Envoy for Electoral Reform in BiH Matthew Palmer and representative of the European External Action Service Angelina Eichhorst by their return to Bosnia and Herzegovina this week are encouraging national chauvinist leaders to continue their fascist demands.

It seems that the negotiating logic of this infamous duo relies on the principle of meeting these requirements in order to stop the open demolition of BiH. Based on Sattler’s report, which saw the light of day a long time ago, with the help of renegade EU Enlargement Commissioner Olivér Várhelyi, Dodik and Čović, and with them Izetbegović, each get what they want: Dodik gets to convert state property (forest, rivers, agricultural land etc.) into entity property that he can sell and gift at will while paving the way for secession; Čović gets the essential third entity he wants to ensure he has his own HDZ fiefdom; and Izetbegović will either be promised a new law against genocide e denial (which even he must know would be ignored), and perhaps a promise that he and his cronies won’t be added to any sanctions lists.

Regular people anywhere – in Travnik, Trebinje or Tomislavgrad – of course they will get nothing, and lose more.

After the disappointing visit of USAID Administrator Samantha Power, who combined vague declarative support for the civic option in BiH while advertising US grant-funded projects that ignore the real needs for fundamental change, everyone in BiH is wondering who actually represents whom here and in whose name?

For a year now, Sattler has been shunned an invitation from the Foreign Policy Committee to submit a report on negotiations and electoral reform in BiH. 30 MEPs have filed a request for an investigation against Mr. Várhelyi for his close co-operation with Dodik. So, it is clear to the citizens of Bosnia and Herzegovina that all these “negotiators” are effectively freelancing, working to cut dirty deals with national chauvinists to camouflage a failed policy – and for careerist reasons rather than values-based strategy or policy.

The deal brokered by the EU, US, and UK in Mostar in 2020 between the HDZ and SDA is the obvious template for the ongoing effort. But rather than “scaling” that deal to the state, it will be seen in its proper frame as appeasement of national feudalism – which Bosnians and Herzegovinians, from within the country and in the diaspora, will resist. Attempts by predatory neighbors to divide the country elicited civic defense in the war – as they must now. But citizens/partisans of BiH have an advantage vis a vis 1992-1995: far more of us can see clearly who won – and it wasn’t ordinary people of any self-description. It was party leaders. We will not allow their victory over us to be reinforced. We will assemble to reverse it – socially and systemically.  After 26 years of apartheid rule, the citizens decided to send these national fascists to the dustbin of political history.

At the invitation of Romeo Franz, Chair of the Delegation of the European Parliament to Bosnia and Herzegovina and Kosovo, in my speech on January 12 this year, I set out, inter alia, the following facts:

“BiH’s three-headed nationalist hydra, led by Milorad Dodik, Dragan Čović and Bakir Izetbegović, have for years delineated their spheres of power, creating a kind of balance of powers by agreeing non-transparent political deals that were alleged to be motivated by an interest in protecting the “constituent peoples” they claim to represent. But in reality, they have only consistently looked after their own personal interests – at evident popular and societal expense. The result has been corruption and repression – against members of the opposition, and against anyone who wants to live in an accountable, democratic, rights-based system. In order to protect their personal interests and stay in power, all three have secured the support of Serbia, Croatia, Hungary, Turkey and Russia. They have picked sides, and have chosen the illiberal team.

The result is an initiative-destroying machine that is encouraging Bosnians and Herzegovinians from every corner of the country to leave at an alarming velocity.

While its activities within and on the border with Ukraine are motivated by Vladimir Putin’s interest in ensuring that Ukraine is never able to thrive as an accountable democracy – and therefore can never serve as a model to which the people of Russia might themselves aspire – the tensions there serve an additional purpose. Russia actually wants to divert the attention of the USA, the EU and the UK from the situation in the Western Balkans. While analysts are divided as to whether Russia does or does not want to fight on its doorstep, with some seeing the accumulation of troops and weapons on the border with Ukraine as actions aimed at misleading the world to improve his leverage in talks with the US/NATO, or to put into motion escalation that could facilitate the hybrid warfare he favors, his actions also facilitate his aims further west. For while allies worry about Ukraine, Russia is deliberately carrying out a silent invasion of the Western Balkans. This is evidenced by the following events.

During the last meeting between the Minister of Foreign Affairs of BiH, Bisera Turković (SDA – the main Bosniak nationalist party) and the Minister of Foreign Affairs of Russia, Sergey Lavrov, in Sochi, a consensus was reached on the opening of a Russian Center in Banja Luka. According to Turković, a decision is expected to be made on opening other Russian “cultural and humanitarian” centers in Bosnia and Herzegovina.

A few years ago, one such Russian humanitarian center was opened in Niš, in southern Serbia, with the ostensible purpose of reacting quickly in Serbia and potentially the region if there should be extraordinary circumstances requiring a rapid humanitarian response. However, the center enjoys diplomatic status, which affords it with the potential to ferry in supplies and even manpower, leading some observers to consider this a sub rosa entryway for (implausibly) deniable armed forces (Putin’s “little green men”) – calling into question the credibility of Serbia’s declared “military neutrality”. For years there have been concerns that this strategy could be used in Banja Luka; now we are seeing that this may come to pass, and with no objection from the SDA’s own Minister of Foreign Affairs.

Negotiations have also begun on financing the construction of the Belgrade-Sarajevo highway with the Russian state agency, with the mediation of the Turkish government, and the construction should cost about 5.5 billion KM. Far-right wing extremist and ultra nationalist gangs with Russian roots have increased their activity in the RS, ranging from the Night Wolves motorcycle gang to the paramilitary group Srbska Čast. And finally, one can’t forget its preference for “religious diplomacy,” with small funds for large Orthodox churches in Serbia and in the RS, which have outsized symbolic impact.

Such projects are a powerful tool for achieving Russia’s local geopolitical ambitions, and Russia’s most powerful geopolitical tool is certainly the connection of Bosnia and Herzegovina to the Turkish Stream gas pipeline and related investments in the oil sector.

The USA and some members of the EU (such as Germany, the Netherlands, Belgium, Scandinavian countries, the Czech Republic, Italy) are actually in favor of the territorial integrity of the state of Bosnia and Herzegovina and want to impose sanctions on Dodik – and undertake other measures – to cripple his ability to generate further instability. The US has done so.  But the EU’s internal fractiousness and large and slow bureaucratic administration, has hampered decisive action. While liberals and Eurocrats dither, European right-wing parties, Hungary and Russia openly support the policies of Dodik and Čović. The British Parliament – itself seeking post-Brexit relevance – at least called for the engagement of NATO troops (likely including their) in response to potential military action. But, just as during the war, the EU relies on toothless statements and fruitless meetings that aim to appease the arsonists.”

The speeches by me and my colleagues Dervo Sejdić and Jakob Finci, were received with majority affirmation from  MEPs who gave us their full support, while four Croatian MEPs (three from the ultra-right HDZ RH) sought to use their positions within the EU to continue to frame BiH as a country that doesn’t deserve the same democracy as other countries in Europe value. They want to ensure that a certain class of people in BiH remain second class citizens – forever – depending on who they are, or in which part of the country they live. BiH’s own Željana Zovko, a former BiH ambassador, was the loudest, rudest, and most vulgar of the lot.  She threatened to call on Bozo Ljubić and BiH Constitutional Court President Mato Tadić to testify in their favor. These reactions, however, likely had the opposite of the desired effect with most other MEPs.

I saw it as an attempt by desperate people to justify their position and compensate for their incompetence. Their nationalist grandstanding is their only product, as they have nothing else to offer.  The difference between them and us – citizens who do not have the unearned privilege of these nationalist elites – is huge. They do their dirty work for money and positions, while we honorably seek a system built on the values we thought the EU itself held and promoted. The only correct way to ensure democratization and the establishment of a truly accountable Bosnia and Herzegovina for everyone living here is through the implementation of the Zornić verdict. Only then can we begin discussions on  the social contract for the 21stcentury that we want to see, which will provide the basis for a citizen-centered constitution and Election Law.

Finally, let me conclude with a message to US and EU emissaries Palmer and Eichhorst. You were better off not returning after your last attempt.  Your return appears not only desperate, but shows you are committed to wrong-headed and non-democratic, anti-European ideas.  If you drop in on BiH with the same principles of non-transparent and non-institutional dirty agreements on the future of our country, where we live, you are guaranteed failure – once again – and lasting reputational damage.

As we see the games being played by local predatory elites, and against the backdrop of Vladimir Putin’s amoral aggression against Ukraine, the message should be clear for our trans-Atlantic friends. For Europe: remember what illiberalism did to the continent in the 20th century, and why your thick web of values-based institutions was established. For the US:  representatives of the Biden administration should behave like American politicians, not Balkan politicians.  Please use your energy to participate in the democratic emancipation of the political system and not in its smothering.

Please be part of the solution and not part of the problem. And stop thinking that we in BiH and the region somehow deserve less accountability, less opportunity, less participation and less democracy.