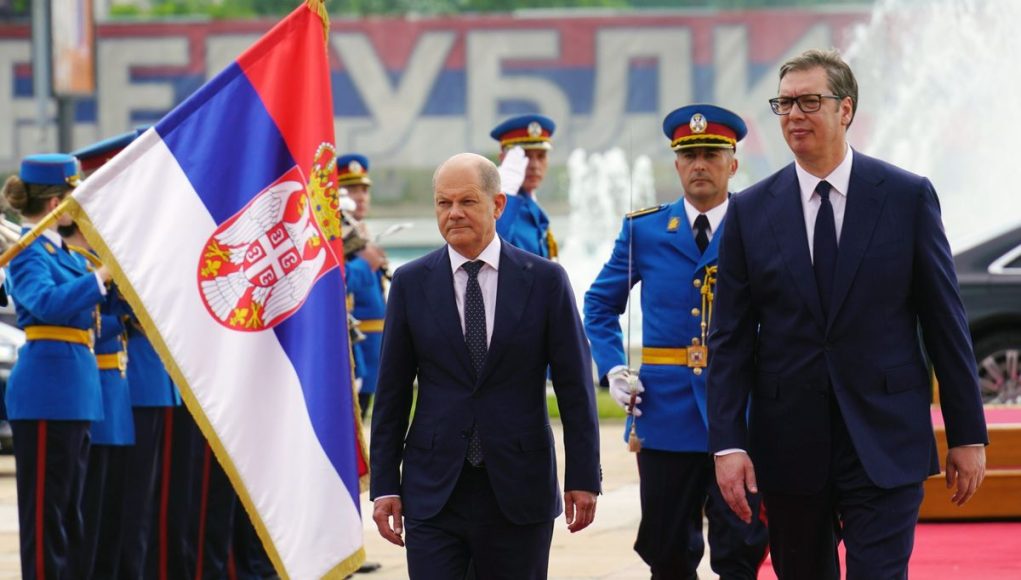 Germany has relinquished any leadership role that it could claim in Europe. Its inadequate response to Russia’s attack on Ukraine has exposed Berlin more as an obstacle to European security rather than its prime defender. Germany also has hypocritical governments – preaching anti-corruption in the Balkans while enabling massive Russian penetration of its economy and political system and declaring multi-ethnicity as a core principle while promoting ethnic segregation in Bosnia-Herzegovina.

Germany became Europe’s economic powerhouse on the foundations of the US Marshall Plan which launched massive reconstruction from the ruins of World War Two. America’s military umbrella enabled Germany to focus on economic development and neglect any responsibility for Europe’s security. The end of the Cold War was naively perceived in Berlin as the end of division and conflict so that business and profits could be pursued with an allegedly democratizing Russia regardless of European interests or values.

Successive German governments opened up the country to Russian state influence, which penetrated all major political parties, national institutions, banks, businesses, and energy corporations. The Kremlin calculated that by enmeshing German politicians and businessmen in lucrative deals it could control EU policy making. The results of elite corruption were visible in energy projects such as the Nord Stream pipelines and the laundering of billions of Russian dirty money through German banks. The appointment of former chancellor Gerhard Shroeder as chairman of two Russian energy companies was deliberately designed to signal that Berlin was effectively under Moscow’s control.

The results of Moscow’s penetration on German foreign policy have been evident since the launch of its extended war against Ukraine. Berlin has been reluctant to send weapons to Kyiv, allegedly  fearing that this could “provoke” Putin and “escalate” the conflict. In particular, Berlin withheld Leopard battle tanks to Ukraine that would have helped Ukraine reverse Russia’s onslaught.Finally, in October Berlin became a more effective weapons supplier when it became clear that Ukrainian air defenses were inadequate to protect civilian targets in major cities. It provided Gepard air-defense systems, MARS II multiple rocket launchers, and Panzerhaubitze self-propelled howitzers 2000.

The one party that has learned real lessons from Nazi Germany are the Greens who contend that a genocidal regime has to be stopped by military force as early as possible. Unfortunately, the Christian Democrats and Social Democrats have remained stuck in the notion that the war is a temporary misunderstanding and they can soon return to business as usual with Russia.

Berlin has also been hesitant in imposing tough economic sanctions against Moscow fearing the impact on its own business sector and economy rather than taking the moral and strategic high ground. Germany is also dragging its feet on providing economic support for Ukraine. A recent G7 conference in Berlin devoted to Ukraine was devoid of any concrete pledges for post-war reconstruction and a proposed new Marshall Plan seems a distant prospect largely because of German reluctance. Washington believes that the EU should take the economic lead just as the US has taken the military lead in aiding Kyiv.

International finance institutions, such as the World Bank and European Investment Bank, contend that Ukraine’s reconstruction should begin quickly for critical infrastructure in parts of the country least exposed to the war. The World Bank estimates a $350 billion total, with $105 billion in the short term to fund the most immediate needs. But despite the EU claiming leadership in reconstruction there is little willingness to provide concrete figures. A mere €19 billion in financial aid has been provided to Kyiv since the war erupted and only €7 billion has been disbursed. This is a fraction of the $66 billion spent by Washington, including direct military aid, replenishing US military stocks, deterrence measures for NATO states, and energy security projects.

Germany’s failures in Ukraine are mirrored in its shortcomings in the Western Balkans. They are symbolized by bureaucrats such as Christian Schmidt who fails to understand the damage he is causing in Bosnia-Herzegovina. Immediately after the October general elections, international High Representative Schmidt enacted controversial reforms determining how delegates are chosen for the House of Peoples, the upper chamber of the Bosniak-Croat Federation parliament. The changes disenfranchise voters, strengthen Croat and Serb nationalist parties, deepen ethnic divisions, encourage separatism, and are likely to lead to armed conflicts.

Berlin has also been at the forefront of EU efforts to forge an agreement on mutual recognition between Serbia and Kosova. But in practice, it has failed to convince Belgrade that Serbia’s EU prospects are at stake if it does not recognize Kosova. Instead, Germany continues to tolerate the destabilizing policies of the pro-Kremlin Vučić government, fails to push through visa liberalization for Kosova’s citizens, and supports the Open Balkan initiative that promotes Serbia’s regional hegemony.

The leaked German-French plan for realizing an accord between Serbia and Kosova is also vague and aspirational with no enforcement mechanisms. Vučić claims that the plan devised by advisers to Chancellor Scholz and President Macron is unacceptable and contravenes Serbia’s constitution because it recommends that Kosova obtain UN membership with Belgrade’s approval. He was also unimpressed by promises that Serbia would gain financial aid and a fast-track to EU membership. According to Berlin, the plan is yet another “basis for discussion” and not a recipe for a final agreement. Unless Berlin together with its European partners exerts some muscle with deadlines and consequences, the plan will culminate in yet another German strategic defeat.

Janusz Bugajski is a Senior Fellow at the Jamestown Foundation in Washington DC. His new book, Failed State: A Guide to Russia’s Rupture, has just been published.