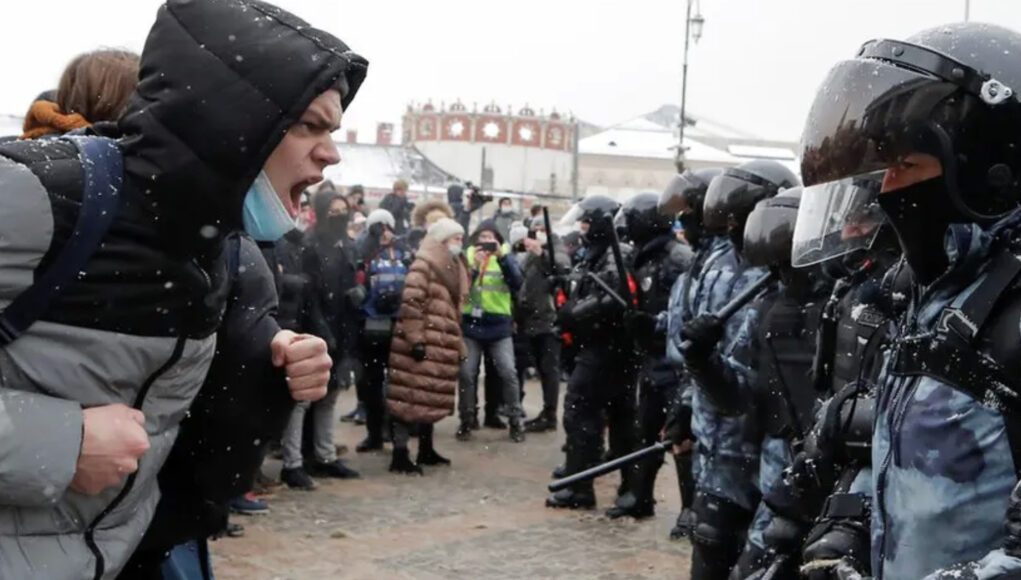 Ongoing mass protests against the arrest of opposition activist Aleksander Navalny in dozens of Russia’s cities may foreshadow the country’s approaching rupture. Not since gaining absolute power twenty one years ago has President Vladimir Putin faced such a confluence of crises compounded by his own domestic policy failures.

The Russian Federation, held together by the Kremlin’s power monopoly, is approaching a period of comprehensive turmoil precipitated by several simultaneous crises. The economy was shrinking even before the pandemic struck and the global recession began. International financial sanctions on Russian companies involved in the war against Ukraine and the subversion of Western democracies contributed to the decline, but it is Moscow’s over-reliance on revenues from energy exports and lack of economic diversification that has precipitated an even deeper downturn.

According to projections by the International Monetary Fund, over the coming years, Russia’s GDP per capita will fall significantly and the post-Covid growth of Russia’s economy will only reach half of the global average. State revenues are declining, living standards falling, income inequalities and wealth differentials rising, social programs diminishing, social conflicts intensifying, and regional disquiet mounting. The poverty rate is rising sharply and a growing numbers of citizens face destitution.

The pandemic has further damaged Russia’s economy. Large budget deficits and bankruptcies in many of Russia’s republics and regions were delayed by substantial subsidies from Moscow in 2020, but they will hit hard during 2021 and further aggravate public resentment. Inadequate government responses to the pandemic have exacerbated divisions between Moscow and numerous federal entities. Citizens in the capital have much easier access to vaccines then people outside the major cities. Putin’s popularity has further nosedived because of cutbacks in welfare spending, unequal access to health care, lockdowns that were seen as violating human rights, and insufficient economic assistance to ordinary people.

Russia is also failing politically, as Putin seeks to cling to power through constitutional amendments that would ensure that he is President for life. The Kremlin is fearful of the voices and actions of ordinary citizens and is trying to tighten its grip by tightening censorship and police repression. But given the size and diversity of the volatile Russian state, Moscow may be unable to control the approaching spiral of unrest.

The biggest danger for the Kremlin may not come from opposition figures such as Navalny but from growing public anger in many of Russia’s 85 federal subjects (including two seized from Ukraine in 2014). Despite Western hopes, democrats in Moscow are unlikely to transform the country into a liberal state by replacing Putin’s authoritarian regime. Putin and his henchmen will try to cling to power but will be most acutely challenged by regionalists, autonomists, and frustrated ethnic groups. Even though Navalny himself does not support a multi-national state and has expressed imperialist positions toward Ukraine, public protests against Navalny’s arrest may be a catalyst for a diversity of movements to proliferate.

If the current round of protests fail to lead to a state-wide democratic breakthrough, then the only solution will be self-determination and even a rupture of the archaic and artificial Russian state. The regional insurrection will be based on an accumulation of grievances, particularly economic stagnation, government corruption, Moscow’s exploitation of regional resources, attacks on language rights among Russia’s numerous nations, unaccountable Kremlin appointments of regional governors, and threats to eliminate or merge federal units. At the core of unrest will be a growing conviction that without Moscow’s political dominance and economic colonialism, the regions will be more capable of ensuring their development and progress.

The Putin administration has irrevocably broken the unwritten “social contract,” first devised in Soviet times, whereby the state guarantees steady material welfare in return for political passivity. Revolt is even more likely in a society where rising expectations of material well-being over the past two decades, especially among an ambitious younger generation, have been thwarted by repeated failures in government policy.

The Kremlin can no longer take public acquiescence for granted. During the ongoing protests there has been a visible shift of opinion toward sympathy with demonstrators. This presents an even more serious long-term threat for the government than the growing number of street rallies. It indicates that an even larger potential pool of recruits exists for a future rebellion. The protests have already much larger than those against the falsification of elections in Moscow in the summer of 2019. The Kremlin must also be anxious that citizens in numerous regions have become involved in open opposition, as this will disperse and weaken the regime’s response.

Russia’s escalating crises does not signify that Moscow is incapable of inflicting serious damage on its neighbors and on international rivals. Despite its economic and demographic decline Russia will continue to challenge the West through its nuclear arsenal and revived military. It will also pursue its campaign of subverting Western institutions through a range of low-cost tools – including disinformation, cyberwar, promotion of ethnic and national conflicts, and the funding of extremists of various political stripes.

In many respects, Russia’s domestic failures make it even more dangerous, as Moscow will camouflage its increasing fragility through external aggression. State failure and federal rupture may convince the Kremlin that it has limited time to equalize the “playing field” by disrupting and dividing the West. Instead of banking on containment or cooperation with Moscow, the Joe Biden administration needs to prepare for an imploding Russia that will present a multitude of challenges for Western security. The scenarios of Russia’s domestic upheaval and escalating rupture need to be comprehensively analyzed and preparations made to manage their impact on neighboring states and regions. A lack of planning will leave the West surprised and vulnerable, just as it was when the Soviet bloc collapsed and the Soviet Union disintegrated.