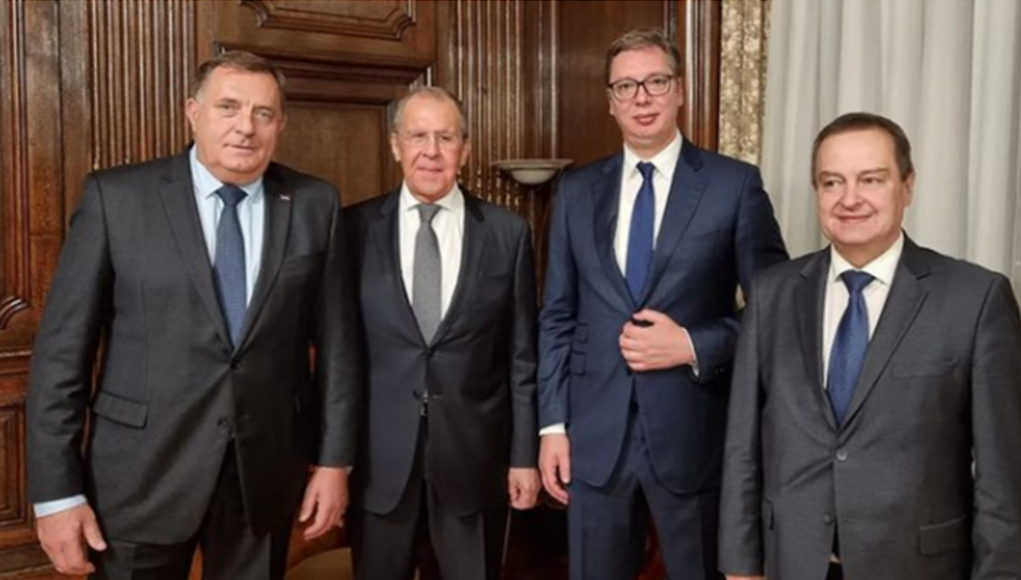 The coming  year will be a perilous test for the Western Balkans, as the embers of war are again being fanned by Belgrade and Moscow. Western governments confront a stark choice – whether to allow ambitious Serbian politicians and their Kremlin patrons to push the region into another armed conflict or deprive them of the tools for triggering bloodshed.

The sparks of war are most evident in Kosova, Montenegro, and Bosnia-Herzegovina – the three targets of Serbia’s mini-empire building. The methods of destabilization may differ in each case, but the objective is clear – to establish Belgrade’s regional hegemony and expand Serbia’s borders. This step-by-step approach has been accelerated in recent months because of Moscow’s decision to promote war in the Balkans in order to create problems for NATO while Russia continues to lose ground in Ukraine.

Moscow does not need to engage its military in the Western Balkans, because Serbia has its own aspirations and willingly serves as a proxy. Presidents Vučić and Putin have a symbiotic relationship whereby Putin helps Vučić in pushing for an enlarged Serbia while Vučić assists Putin in penetrating the region and generating problems for Western institutions. Instability in the Balkans enables Moscow to claim that the EU and NATO cannot resolve or prevent conflicts.

For the Kremlin, undermining the Balkans is a low-cost operation. Moscow provides Belgrade and Banja Luka with diplomatic and financial support together with arms, propaganda, disinformation, provocateurs, and armed gangs. Russia’s methods of subverting and subordinating neighbors also serve as valuable examples for Serbia to pursue three main strategies – division, escalation, and domination. And all three will provoke reactions by Serbia’s adversaries that can spiral out of control into outright violence.

First, the strategy of division is evident in attempts to mobilize the Serbian minority in Kosova, stoke fear, engender ethnic animosities, and prove that states in the Balkans cannot be multi-ethnic. The erection of roadblocks, attacks on journalists, the forced conscription of peaceful local Serbs, the dispatch of provocateurs, and the destruction of property are all part of the methodology. Divisive processes have been evident in Montenegro through the Serbian Orthodox Church, special forces, and nationalist radicals challenging Podgorica’s independence. In Bosnia-Herzegovina, the Serb entity serves as the main vehicle of division and Croatian nationalists have also been enlisted by Belgrade with the promise of territorial gains.

Second, Vučić and Milorad Dodik, commander of Bosnia’s Serb entity, both engage in a strategy of escalation to gain leverage with Western officials. By threatening armed intervention or political secession they seek concessions from the EU and US and subsequently engineer further rounds of instability. Such escalations divert attention from the core problems – Belgrade’s non-recognition of Kosova’s statehood and Banja Luka’s challenge to Bosnia’s integrity. It also serves to portray Prishtina and Sarajevo as the culprits and promotes Western appeasement to avoid deeper conflicts. As a result, the EU spends most of its time trying to defuse conflicts manufactured by Serb leaders instead of dealing with the fundamental causes.

The third Serbian strategy of creeping domination is designed to corral neighboring states under Belgrade’s umbrella, whether as economic subordinates through the Open Balkans project, as political dependents through diminishing sovereignty, or through outright territorial absorption. The partition of Kosova and Bosnia is periodically touted to test international resolve and to enmesh Croatia and Albania as co-conspirators in border changes and territorial gains that will primarily benefit Belgrade.

To defeat Belgrade’s three-pronged regional strategy Western leaders need to deploy three effective weapons: diplomatic, military, and economic. On the diplomatic front, Kosova, Bosnia, and Montenegro must not be pushed into conceding ground to ethno-nationalism. A primary example is the pressure on Prishtina to enshrine territorial division by allowing for the creation of a Serbian entity, styled as a “municipal association,” which will mimic the state destroying policy of the Republika Srpska in Bosnia. The formation of any ethnically based divisions is also an invitation for deeper anti-Western subversion by Russia.

In Montenegro, Washington should not support political players who claim they are anti-corruption and pro-European while being used by corrupt anti-Montenegrin and pro-Russian forces to destabilize the state. It must also challenge any electoral manipulation in Bosnia that strengthen the stranglehold of ethno-nationalist parties. Such illusory solutions will deepen political and national divisions and ignite violence as the Bosniak population feels increasingly besieged.

In the military arena, the most effective way to prevent Kosova’s destabilization is a display of power by NATO and the Kosova Security Force that enables Prishtina to enforce law and order throughout the country. As we know from the 1990s, Serbia only respects strength not weakness. A NATO lesson in dismantling roadblocks and enabling freedom of movement in Kosova will also be learned by Belgrade’s operatives in Montenegro and Bosnia. In addition, both Kosova and Bosnia need a pathway to NATO membership and Croatia’s NATO allies must lean on Zagreb to support security through NATO enlargement.

In the economic and institutional domains, the EU needs to assert that it will sever all revenue streams and accession prospects for Belgrade if Vučić continues to pursue division, escalation, and regional dominance. Conversely, Kosova needs a clearer pathway to EU accession alongside recognition by the five EU holdouts. Serbia’s institutional and economic isolation from Europe will be reinforced by the accelerating decline of Russia, which faces economic catastrophe and state fracture and will have shrinking possibilities to assist Serbia.

A primary focus of Western policy in the Balkans must be Russia itself. It is insufficient to complain about “malign influence.” Russia’s destructive presence must be actively combated in all arenas – politics, energy, economy, and media. A good starting point would be for NATO to demand that the Russian intelligence outpost in Niš, cloaked as a “humanitarian center,” be closed or Belgrade will face the termination of any beneficial military contacts. By enabling Russia’s penetration of the region, Vučić is collaborating in the war against Ukraine by gifting Moscow a Balkan card in its struggle with the West.

Janusz Bugajski is a Senior Fellow at the Jamestown Foundation in Washington DC. His new book is entitled Failed State: A Guide to Russia’s Rupture